Where We Got the Bowls 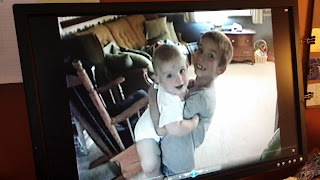 Way back when Sam was still a diaper wearing person who toddled more than walked, he was a quiet kid. Then he stopped toddling and picked up a big boy gait, and we realized he was still quiet. Too quiet. One intense evaluation by a speech therapist later and we had our confirmation.  Sam had serious speech delays.

I should have seen it coming. We were very familiar with speech therapists already. His older brother has a metabolic disorder that left in its wake a pretty nasty case of low muscle tone.  Having weak muscles in your jaw, lips and tongue make it difficult  to form words correctly. We spent years hanging out in the speech therapist's office, working on strengthening the muscles around his mouth.

By the time Sam was born his big brother was speaking well and on the fast track to normal speech.

I assumed I knew what to look for in Sam's speech development, since his brother's  speech therapist had become one of my best friends in Missouri. (We did spend a lot of time together, more than I spent with any 'regular' friends and we were both passionate about my sweet boy. There's nothing more bonding than someone loving your kid almost as much as you do)

That was the problem. I wasn't hearing anything. My baby was mute. Not exactly mute. He made sounds. But nothing close to language.

It was when he had passed his second birthday and I realized he had never said the word 'NO!" that I became alarmed. What two year old (or eighteen month old, for that matter?) has not pounded his fist on the highchair tray and yelled NO! in the middle of dinner?

I should have noticed it earlier. But I was watching for zebras, and antelopes showed up. Plus we had just packed up our four young children, all born in Missouri, and moved them from the only city they had ever lived in, plunking them down in the middle of the metropolis of Washington D.C. (just months after 9/11, mind you.)

There was a lot of unpacking and signing up for schools, and figuring out the metro lines stuff going on. The fact that Sam was quiet was not noticed because he was...well...quiet. The squeaky wheel thing and all that.

So suddenly I noticed and found the box with the address book in it so I could call best friend speech therapist back in Missouri. She confirmed my concerns and advised I get on the case immediately.

Thus began Sam's journey with speech therapists. But this time we were not working on blowing bubbles and cotton balls to get stronger lips. We were working on finding sounds to make into words.

We had been doing baby signs with him and they became his life saver. He could express, through basic signs, what he wanted. I was introduced to the amazing Signing Time videos. They helped our whole family, including grandparents, understand how to communicate with our youngest child.

But part of the problem with having no speech as a one, then two, then three year old, is not being able to express how you feel. He didn't bombard me with constant questions through the grocery store, like his siblings had done. There was no discussing his favorite desires for Christmas that year. He didn't have the opportunity to question how the sky was made or why fruit loops don’t grow on trees. The basic needs were communicated but I missed knowing what my boy was thinking.

Then one day, after months and months of speech therapy, the language started to come. Slowly, slowly we built up words into sentences and Sam started to realize he could talk. He could ask questions and state his feelings. And it was fun to see what he had been carrying around inside that head all those quiet months.

One of my favorite moments came when he had become a  tall, confident three-year-old. He sidled up to the counter and asked for a bowl of breakfast cereal. "Me want cee-yal, mama".

And as I poured out the frosted flakes and slopped on the milk my sweet boy looked up to me and said, oh so seriously, "Where we get dees bowls, mama?"

All those months of silence and my boy had been wondering where I'd gotten the bowls.

It makes me wonder what else he had been wondering, that he never got to ask.

I met with his school speech therapist today and he is right on track. He will still receive services through the summer and then into second grade, but most people who meet him would never know he ever struggled with finding language. We feel blessed to have been able to shower him with the best specialists in every city we've lived in.

Sometimes I think back to Sam's preschool days and wonder what treasures we missed. Sam is a very creative kid and I wonder what questions he had about the world around him that he could never ask because language was foreign to him. What magical profound thoughts circled through his preschooler brain and had no way of getting out? I will never know the answers to these questions but I am thankful anyway. So thankful that he finally did master our language and is able to fit right in to his second-grade class today. Thankful that he had great teachers along the way who brought out the best in him.

And also thankful that he made peace finally, with where we got the bowls.

This is usually a area primarily at risk from mud and additionally damage -- relates to your ex inside footwear, which can be regularly dull and also whet, specifically for the period of icy weather so they might deliver those to get a for an extended time time
Microneedling Treatment

it's so refreshing to see a post that talks straight to the point. thanks so much for writing about this it has really helped me with building my experience. thanks a lot

its been long since i saw a post that's so educative and informational. i will make sure to share this my facebook group. you can also view contents on our websites below.

French Bulldog Puppies For Sale Near Me

Oke
Provide interesting information, such as tutorials, humor, news, and many others. And don't forget to support this blog so you can write for you every day.
Thanks

How to Maintain Good and Correct Dental Health

How to be a successful YouTuber and make lots of money

Its always nice and i feel honored reading your Blog . Your Blogs always based on all basic concepts which anyone can understand so easily and relate to Pleasure to read your Blogs Sir.

Boston Terrier Puppies For Sale Near Me

Boston Terrier Puppies Near Me

yorkies for sale near me

tiny teacup yorkie puppies for sale near me

teacup yorkies for sale near me

mini yorkie puppies for sale near me

Boston Terrier Puppies For Sale Near Me

Boston Terrier Puppies Near Me

treating temporary conditions, and overall long-term health and well-being. A personal connection with your health-care provider or pharmacist is an important part of medication adherence.

Pomeranian Puppies For Sale In USA

Pomeranian Puppies For Sale Near Me

Pomeranian Puppies Near Me

puppies ready for good homes. For more information and your recent photos, visit our website below. Thanks

Get the Best and Healthy Purebred male and female Great Dane puppies ready We now have good looking puppies ready for good homes. For more information and your recent photos, visit my website below. Thanks

At Dental Boutique we are offering Dental Damon and Invisalign Braces in All over Dubai. To get our services feel free to call us at 055 425 9050
dental clinic near me

Are you willing to purchase your favored handbags at a reasonable price range? Do you like collecting various sorts and designs of bags to flaunt them at parties? If yes, this is the correct spot for you to add your wardrobe with trendy and spectacular ladies' handbags from our site!
buy cross body bags online