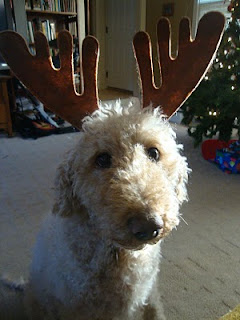 Disclaimer: This column contains material that might be considered adult content. Please preview before sharing with any person under the age of ten.

It’s finally happened in our house. After almost two decades of welcoming the red suited guy into our home, the last of our offspring has stopped believing. It’s a milestone I never thought about until it suddenly popped up this past weekend. It's a big deal to me, because it says so much about how our household is changing, so quickly, from young kids to young adults.

I guess I’m lucky that we got to squeeze a few extra years out of the whole magical process. Our firstborn stopped believing about the time our last born was, well…born. So as one belief evaporated, a new little person began his path to embracing it. It was a good run in our family. As older ones stopped believing, they took great joy in helping little ones hold onto their faith.

It’s a magical thing, to believe in something as special as a grandfatherly man who spends his whole year thinking about your desires. Sometimes it’s hard to let go. When our number three child stretched his believing years out longer than we had ever thought possible, the only way we could comfort him, as reality became too much to ignore, was by letting him stay awake into the wee hours of Christmas morning, to be a part of the giving. Suddenly playing Santa seemed just about as fun as believing in him.

I should have known this would be the year that our Santa run would end. Our youngest is in the later elementary school years. Most of his friends have stopped believing. But he is the baby in our family, so we all did what we could to stretch out the tradition.

In the past few years he’s jumped on the assignment of writing the letter. I’ve had to be pretty sneaky to get my photocopy of said letter (for my heirloom files) before he rushed it out the door to the mailbox. But this year he’d lost his zeal.

I reminded him several times over the course of last week. He never got around to it. I assumed he was just thinking about other aspects of the holiday and distracted by studying spelling words and book report projects. But then it all came together. At one point, in the lazy part of Sunday afternoon I said, “Sam, you should go write your Santa letter now.”

He didn’t answer me. He quietly kept working on the Lego creation that was in his hand. I pulled him in close to me on the couch and whispered in his ear, “Is there a reason you don’t want to write your letter?”

He quietly mumbled back, “I just don’t feel like it.” I took his chin in my hand and turned it to face me. “Is there a reason you don’t want to write that letter?”

And instantly I knew.

I knew that he knew.

And I knew our Santa era was over.

Once it was out in the open we curled up on the couch and had a long conversation. The football game we’d been watching was paused as we soaked in this historic moment. His dad and I laughed and talked about how old he suddenly seemed to us. This ‘baby boy’ who would forever hold that title in our family, kept passing milestones that told us otherwise.

He had questions of his own. He ran upstairs to retrieve the ‘signature’ Santa left him last year. “So, who did this?” he asked, accusingly. Then he wanted to know logistics. Who drank the milk and ate the cookies? How did we sneak presents out in the middle of the night when he knows for a fact that we’re old and desperately need our sleep?

It was entertaining but surreal to share stories with him about trying to pull the whole thing off, right under his nose. It got especially tricky when we started visiting Grammy’s house for Christmas, after we moved to New York. That van trunk full of ‘presents’ covered by coats and blankets made more sense now.

I told him I knew his belief was slipping when he lost his excitement about the letter. I reminded him that last year he’d been diligent about getting his desires sent to the North Pole. He looked reflective for a minute, then said, “Yeah, and do you know how many hearts I put on that letter last year?!” I suspect he was in his last stages of believing when he wrote that letter, and every heart included on his wish list was a small plea for validity.

Once the questions were asked and answered, we snuggled on the couch and turned on a holiday episode of the TV show Glee. I had been protecting him from it since the story line included a teenage girl who still believed, as her friends rally up to help her hold on to the magic. It held special meaning for my boy, now that he was one of the big kids, the ones who knew the truth. Several times in the course of that show he turned to me and grinned, with that knowing grin only a non-believer can possess.

And then came the sweetest moment of the night. Just as he was headed up to bed, he gave the regular good night hugs. But before he pulled away he whispered one sentence in my ear. “Thanks for taking it so well, mom.”

I think my boy is definitely gaining maturity. Even he could see that his not believing anymore was as big a deal.

To him, but also to his sappy hearted mom.

So good-bye, jolly Santa. You will be missed. Don’t stray too far away though. Someday down the road, when grandchildren start ringing my doorbell, I’m going to be thrilled to call on your services again.
Posted by Just One Foot at 12:43 PM

Oh I don't look forward to the time when my baby boy (now 6) learns the truth. It will be so hard on me!

It sounds like you've handled it beautifully. My oldest gave it up about the time my youngest was born, too.

I think the middle one 'knows' but isn't willing to admit it yet. I asked oldest to kind of feel him out and give him a reminder not to ruin it for youngest. Youngest though - he's a hearty believer - last year he was even Santa Claus for Halloween! I think it will last a bit for him yet.

How awesome. For both you and your boy. I know we are probably on our last year ourselves. Smarter questions and friends at school not believing. I think it's harder for me because I love seeing them so excited about it all....

oh this made me weep...
i can feel it coming, even as Ander CLINGS to his shreds of evidence.
hohoho,
stacey