When The Music Moves You 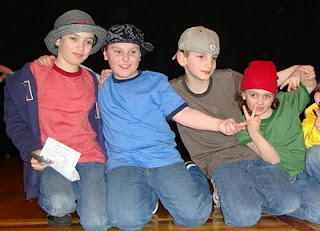 It was not the way I would have preferred to spend a very cold, snowy Thursday night, but it meant a lot to my son. For the second year in a row he had signed up to participate in his elementary school’s annual lip sync night. Their last practice was Thursday night. Sam is my child who spent most of his first five years hiding behind me whenever we were in public. How could I not support the fact he seems to be bursting out of his shell with wild abandon?

For an hour and a half I sat in that auditorium chair and watched group after group file onto the stage, practice their dances and try out their props. From kindergartners to fifth graders, every act had something unique to offer. And as often happens when I’m given more than ten minutes of down time to reflect on life (and not dinner, or laundry, or dishes…) I came to some interesting revelations.

For one thing, I would have never been able to pull off such a feat in any year of my elementary school career. Every mom I talked to said the same thing. Not a chance you would have coaxed me onto that stage. And I began to wonder why things seem to be different today. Why is it that there were so many kids signed up to put themselves ‘out there’ in such a vulnerable way, that we had to have two nights of practice, just to fit them all in?

I think part of it stems from the influence of music and videos. The generation of kids I saw perform last week have been surrounded by video input since they were toddlers. They begin with Elmo and Barney, who have a few simple moves in their songs, but they also have shows like the Backyardigans. If you’ve never seen this show, it’s an amazing cartoon, geared to the 3-5 year olds, where the characters not only harmonize, but do some pretty impressive dance moves too. It’s a great way to get preschoolers off the couch, dancing along with their favorite cartoon friends. It also starts a chain of events that make kids more comfortable with moving their bodies (I was a preschooler in the early 70s. Mr. Rogers was great and all, but he didn’t do much groovin’. Neither did Captain Kangaroo or his trusty moose).

Next, this generation has had access to music and videos like no other generation before. Many TV commercials are filled with popular songs and dancing people. Even kid oriented stuff is more sophisticated. I don’t remember the nursery rhyme songs of my childhood having a back beat. “I’m a Little Teapot” had motions, but they were so simplistic, your grandma could perform them. The kids in elementary school today know who Michael Jackson is as well as the artists who play on current radio stations. There seems to be a very thin line between ‘kid music’ and ‘adult music’ these days.

And we can’t have this conversation without bringing up the existence of dance games. Dance Dance Revolution got everyone off the couch and in recent years the dance games offered for Wii and Xbox have had the power to make anyone feel comfortable showing off their moves. In our house, the general opinion before Christmas was that we didn’t need the Dance Revolution game that went with the Kinect system. Then Santa left it under the tree and we’ve had to have family meetings to discuss who gets to have their friends over on which nights to play it. I’m convinced that kids today are much more comfortable dancing in front of their friends.

Which brings me to my favorite part of the lip sync show. I was amazed by how many boys had signed up for it. When I was a kid, this would have been a ‘girl’ thing. Girls took dance lessons. Girls were the performance types. Guys were guitar players and rock stars. But guys didn’t dance and sing.

But this is a new generation. Today’s ten year olds have seen many cool guys (singers and dancers) carve a new path for males everywhere. It’s suddenly really cool to have some dance moves up your sleeve and show them off when asked. There are as many guy icons in the video dance games as there are girls. Sam gets mesmerized in the effort of copying the character on the screen and has become very confident with the new moves he’s learned. I’m convinced it’s part of the reason he was so at ease up on that stage, when the real show started on Friday night.

The auditorium was packed. All three of his older siblings, as well as three of their friends, were in the audience. But he didn’t care. He knew his moves. He felt the music. And it was all about having fun putting the two together.

Side note: Two weeks ago I wrote about missing one of the best games my football team has ever played. I may never know who took mercy on me and left a copy of that football game in my mailbox at work, but whoever you are…THANK YOU! It had to be one of the best gifts I’ve received in a very long time.

Now here's a short video of my boy (the one in brown) at his big debut..

I think you've hit the nail on the head with the new "cool" image the kids have these days. I also think that his coming into his own might be a side-effect of older kids moving on. I was the youngest and I remember my mother commenting how I really came into my own being once my sister and I were in different schools.

Either way - it is so much fun to see your kids becoming their own beings.