For Two Weeks Mine 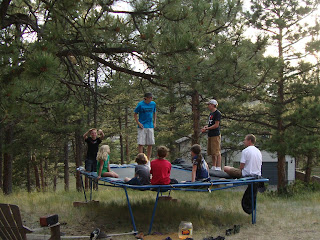 They arrived on a flight from San Francisco, two young faces, with slightly nervous smiles. The airline escort walked them out of the plane, handed me the paper to sign, and suddenly they were mine.


Not forever mine. But for two weeks mine.


These two children, my niece and nephew, who I somehow love as deeply as my own, even though I have never spent more than two days a year with them, were finally going to hang out with my family and make some real, lifetime memories.


They were both born in Wales, the country their mama calls home. My husband’s brother was wise enough to marry her, after finding her to be the lovely mix of kindness and fun. She’s the perfect kind of sister to me, all the good stuff and none of the childhood sibling baggage.


When she gave birth to Tiger, just months after I’d had my fourth child, my heart literally ached to see this child. I often received photos in the mail, of a round faced cherub, and wondered if I’d ever get to know her, really know her. I signed every card and email with the words, “tell her Aunt Judy loves her…”


And then, after a couple of years, just ‘tell her…’


A few years later a preschool Tiger got a brother. He was named Soul, a name that suits him perfectly. The day he was born his daddy called us from Wales, having just come home from the hospital after a long day filled with labor and birth. On the way home he had stopped by the pub for a minute, as any good Welsh would do, whether born there or just transplanted. So by the time he called us he was a flying just a bit, high on new life and magical moments.


His brother, my husband, was at work, with the time difference and all, so I was blessed to be the one who spent the next hour on the phone, hearing Soul’s daddy gush about how good life was, how amazing having a son felt, and how incredibly much it made him miss his own dad.


It’s a phone call I’ll never forget. One of those moments frozen in time, when you know as it’s happening that this is what life is all about. Ever since that day I’ve felt a few notches closer to this brother-in-law, because he chose to share that one special day in his life with me through a very long distance phone call.


As my niece and nephew grew up in the Welsh countryside I sent them cards and packages. Their mama sent me pictures of them camping on the beach and attending local fairs. Their little bodies grew into taller bodies and their baby faces became those of full fledged children.


Occasionally we caught up with them in New Hampshire, when they’d make a rare flight across the pond to visit grandparents and we could manage to get there ourselves on the same days. I took a zillion pictures of them, in those brief snippets of together time, knowing they would change so much before I got to see them again.


Then four years ago we got great news. The whole gang was moving to San Francisco. We lived in New York at the time. They were still three thousand miles away from us, but at least we didn’t need passports to go see them anymore.


Two years ago they came to visit us in New York. We spent a few glorious days showing them our world and soaking in all the hugs we could.


Two months ago my sister-in-law called and asked if they could come stay with us in our new home state of Colorado, while she went back to Wales to see her family. I jumped at the chance. Finally an opportunity to know these two children I have adored from afar…really really know them.


Nothing makes you know a child better than being their surrogate mom for a few weeks. There’s something priceless and intimate about being the one in charge of what they eat, how often they brush their teeth, and how they’re doing emotionally once they start getting the homesick blues.


They are eleven and eight now. The perfect ages to be independent, but still blend in with our busy household. There are no diaper bags or naptimes. Just big kids who can hang out and find their own fun when nothing is planned, and also appreciate the times when we do take an afternoon to go exploring.


Yesterday my son Isaac and I went to the airport to pick them up. After paying our dues by standing in line at the check in desk, then making our way through security with my metal leg (that always attracts attention from the TSA officials), we found ourselves standing at the arrival gate.


And then there they were. A bit taller than the last time I’d seen them, but the faces were still so familiar. Just like any mom (or aunt), I could still see every year of their growing-up faces… the two year old face, the four year old face…mixed into their smiles.


I signed the airline paperwork and we were on our way to baggage claim. It was such a joy to see these two kids, who are so photographically familiar to me, fall in so easily with my tall teenager. They became instant siblings.


We rode the tram to the other end of the terminal and stood together, sharing jokes and stories, as we watched the baggage carousel go round and round. On the drive home we stopped for a burger and an Icee, then made our way out of a scorching Denver, up to our mountain town where the temperatures are ten degrees cooler and the heat is chased off by random mountain breezes.


The afternoon was spent trying out their new world. They jumped on a trampoline with my other kids and the assorted neighbor kids who stopped by. Soul couldn’t get enough of the ninja warrior salmon ladder my older son built a few weeks ago. He also found a new use for the circular bike track my boys dug into our back yard. Forget the bikes, Soul likes to run it, hopping  through each bike jump on his skinny, nimble legs. 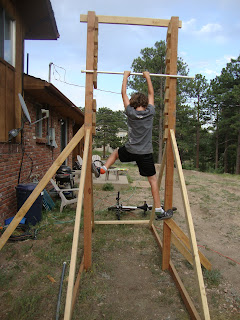 
Like their first day in the U.S. public school system, after attending a small school in the Welsh countryside. A new president named Obama had been inaugurated the day before. Their new classmates were hopping with excitement, the word “Obama” thrown around loosely. Tiger had no idea what, or who, an Obama was. She guessed it was maybe the principal’s name. When the class assignment was to write about how they felt about Obama’s inauguration, she had to ask for help from her new teacher.


Or when, in their first few days in America, they went as a family to Target, to get some furniture for their empty rental house. Before the shopping trip was over Soul had become separated from his family and a full Code Adam was announced. All doors were locked, every department searched, until my four year old nephew was once again found and reunited with his family. It’s a moment I’m sure Tiger will never forget.


Of course Soul’s first impressions with this new country were a bit more preschool boy oriented. He clearly remembers the small frog they found, clinging to the wall of his new bedroom. What more could a boy want in this new country, but a new bedroom that included hopping wildlife?


I had good intentions of getting them to bed early, on their first night in my care. They were both operating on very little sleep, from early morning flights and insomnia inducing excitement the night before. But when darkness fell, they were not ready for sleep quite yet. After an afternoon full of jumping on a trampoline surrounded by new friends and familiar cousins, it was time for a game of night time tag.


It gets very dark around here at night. So dark that my son nearly ran over a small deer when he was ‘it’ and quietly stalking around the outside perimeters of our house. I sat inside, writing at the computer, surrounded by darkness myself, as every light in our house had to be off to get the most serious effect for the game. But the sound of squeals and giggles lifted me.


This is what I’d waited for, for so many years. To have these two specific children under my roof, becoming real family with my own children.


Eventually everyone settled down into beds, and I’m sure the sand man came just minutes after I’d given the last hug and left their room. It was a full day, after all.


A day full of finally knowing these children I love like my own.