The Heat of the Moment 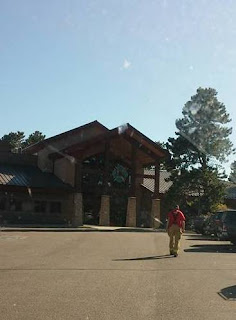 I heard a car door slam so I opened the back door and looked outside. My six and a half foot tall son was digging his firefighter gear out of the back of his friend's truck.

His friend, Harrison, is also in the local Fire Academy. For three months they have been donning the heavy, smoky gear and learning how to put out fires, rescue 'dummies', and respond to emergency calls. They are both soaking up the training, so excited to be headed into a career they love.

Harrison's dad is a volunteer firefighter in our community. The kind who puts in more volunteer hours than many people put into their paying jobs. He's a guy who will do anything for his community. His character has been passed down to his son.

I got to know Harrison through my job at the Rec Center. Harrison's shift as the climbing instructor for the indoor rock wall overlapped with mine at the front desk. I enjoyed shooting the breeze with him on slow afternoons because he was a kid who belongs to that demographic I love - end of high school/early college. He's hungrily looking all around, seeing what options are out there for his future, and deciding which paths he should take. On top of that he's funny and entertaining and made my day at work much more enjoyable.

It was exciting to hear that Harrison was accepted into the Fire Academy in the same class as my Isaac. The roster is made up of a lot of older guys, married, with families, and having a guy who could relate to him made Isaac's first days of training a bit less stressful.

My son has wanted to be a firefighter for a long time. He has passionately dreamed of it in recent years. Immediately after finishing high school early he headed down to the fire program at our local community college, taking their fire classes. But he was desperate to get his feet wet, to study the real stuff that makes a firefighter. He wanted to run into those smoky practice buildings.

He applied for our Fire Academy last year, when he was barely 18. It's an intense year-long program that we are so lucky to have in our community. Its purpose is to train people who want to join our huge squad of local volunteer firefighters. It's also a great program for young men who want to pursue firefighting as a career. It's not easy to get a spot on the team.

Rightfully so, the selection committee took into account the number of young guys who apply for the much-coveted spots, thinking it will be a glamorous life, then drop out when the going gets smoky. They turned Isaac down and told him to come back next year if he was truly interested. They told him to get more training on his own first, to prove to them he was serious. 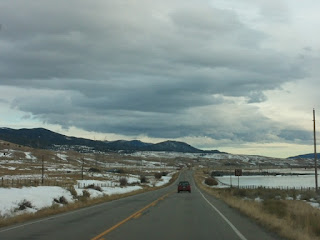 That fall Isaac was in the deep woods of the mountains near our house, learning how to fight wildland fires. He soaked up every bit of training he could as they set small fires in the trees, then turned around and learned how to safely put them out. He took a few more college classes, to add to his resume. Then he applied to Fire Academy again.

He practiced for his interview for weeks, studying everything online he could find related to the questions they might ask. He walked into that room, all six and a half feet of him, and trembled with nerves. And when he walked out, he was accepted.

From the very first day, Isaac and Harrison have been strongly holding their own. They never complained when it was time to put on the heavy gear and haul equipment around the practice areas. They have classroom training on Mondays and real world exercises on the weekends. 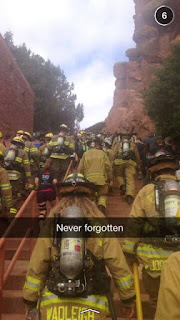 On September 11th of this year they put on their full gear, masks and tanks included, and walked up as many flights of stairs as the first responders did in the twin towers. Then they walked a few more flights, out of deep-seated respect. They each had a laminated picture of a fellow firefighter from 9/11 attached to their coats. Isaac and Harrison were honored and inspired to be there. To be 'one of the guys/girls'.

For the past month, Isaac has repeatedly told me about a specific date in November. It's the day they officially qualified to respond to local fire calls. He's carried the dispatch radio around for a month, getting used to it interrupting the rhythm of his day. And then that day came. Yesterday.

They had a full day of live fire training. The practice house was lit on fire, pretend people scattered throughout. All day long they pushed their bodies to the limit and practiced rescuing dummies, and attacking different types of fires. By late afternoon, Harrison and Isaac were exhausted.

But they knew it was 'the day'. They knew they had finally reached the day they got to practice responding to that buzzing walkie-talkie that had become a part of their bodies. They discussed with their commanders what types of calls they could go to, and what kinds they still had to wait out. As they climbed into Harrison's truck and got ready to head home, the walkie toned out. It was an emergency call. And it was less than a mile away.

Harrison and Isaac looked at each other, both stunned that they might have their first call this quickly. The adrenaline kicked in. With huge grins on their faces, both of them knowing exactly what the other was feeling, they rushed to get their gear together.

In less than 5 minutes, they were at the scene, crawling off the fire truck in full gear, just like they'd been trained. The situation had been resolved by the time they arrived. It was a small car fire that was quickly extinguished by other responders. But it was their first call. And they suddenly felt authentic.

As I walked out my back door an hour later I saw two huge grins. I only had time to ask how academy had gone that day before I was interrupted by two young men spilling out the story of their afternoon. "We responded to our first call!" They tripped over each other's sentences. The stories spilled out. The excitement could almost be physically felt.

All that training, dreaming, choking on smoke, and pushing through pain had finally paid off. They had finally become real.

As it turns out, Harrison and Isaac now hold the record for the shortest time a 'probie' has had to wait, after being cleared to respond to calls, to reporting on a call.  The last record had been more than a day. For Isaac and Harrison, it was a handful of minutes.

True to tradition, they both headed back to the firehouse after the call, so they could give the recently used fire truck a bath. When she breaks you in on your first fire call, you owe her a good scrub down. Being the excited, yet really just giddy young boys that they are, they talked to 'her' as they hosed her off. Telling her how thankful they were that she is so reliable. And how much they were going to enjoy seeing her on calls in the future.

For the second time that day they left the firehouse. This time, they no longer left the parking lot as newbies. They had been broken in. They had joined the ranks of the thousands of hard working men and women before them. Those smiles could not be erased.

And I was the lucky recipient when they arrived in my driveway a few minutes later. It was one of those moments, as a parent, that you wish you could freeze. But even a video or photograph taken could not save this scene. It was a feeling as much as a snapshot in time.  I couldn't risk losing the energy by pulling out my camera.

It just had to be lived, absorbed, then finally shared with you.

Posted by Just One Foot at 3:33 PM No comments: Links to this post