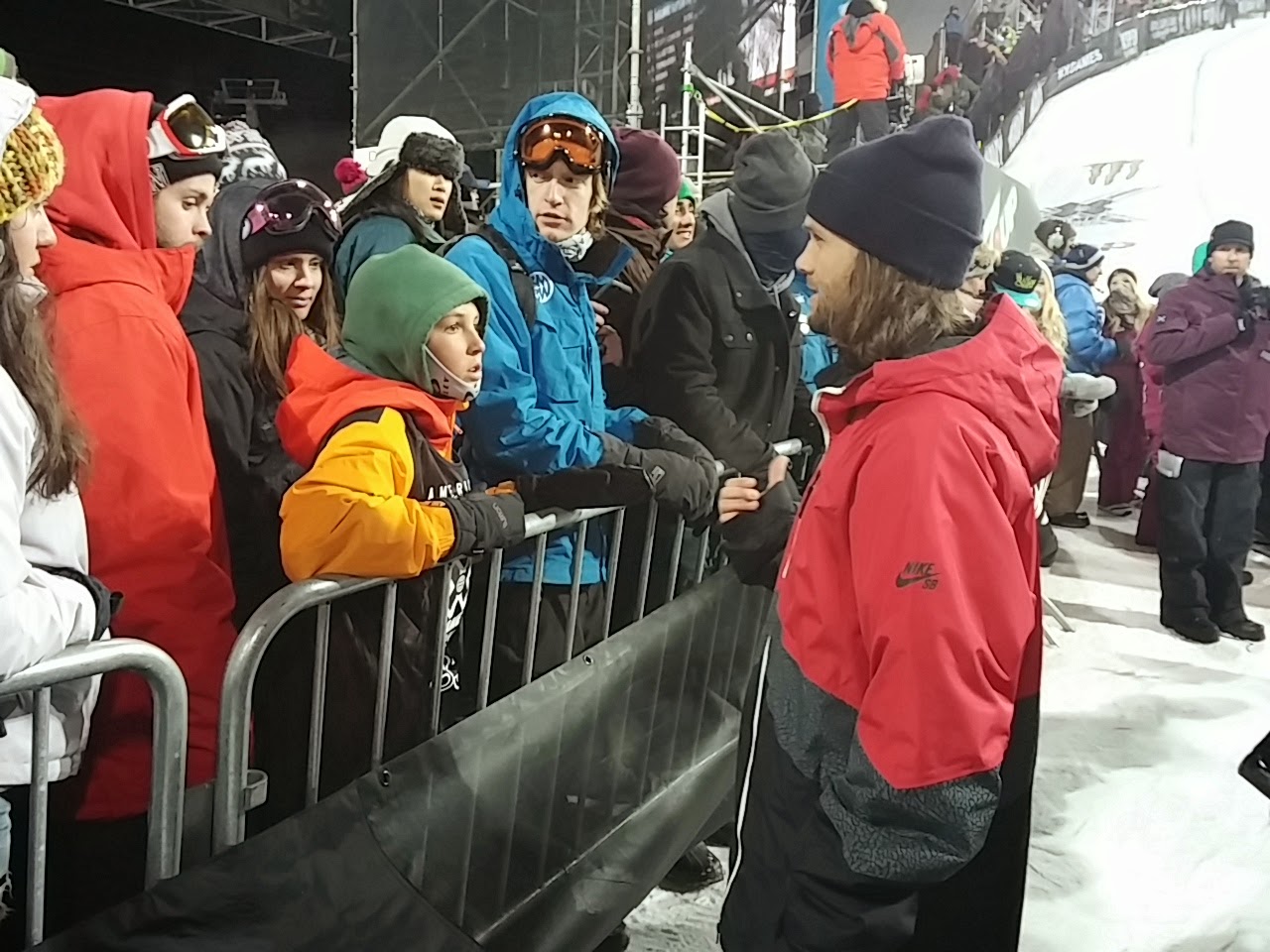 If you've followed my writing on GeekMom.com, you already know that I'm a huge fan of the Winter X Games. With four kids, three of them risk seeking males, we have religiously watched the X Games for most of their childhood. We never dreamed we'd ever live close enough to go in person.

Immediately after we moved to Colorado, we looked up the dates and made plans to attend. I was able to go with a media pass, because of my connection with GeekMom, and it was an incredible four day weekend, full of great new memories.

We've now attended three years in a row, and I hope to be a regular for many years to come. There are many reasons why I love the X Games (which I've written about many times for GeekMom.com) and one of the big ones is the accessibility of the athletes. The path from the end of the Super Pipe, back to the snowmobile that takes athletes up the mountain, weaves through the crowd of excited fans. There is a lot of high fiving, a lot of selfies snapped. This even happens during the competition. 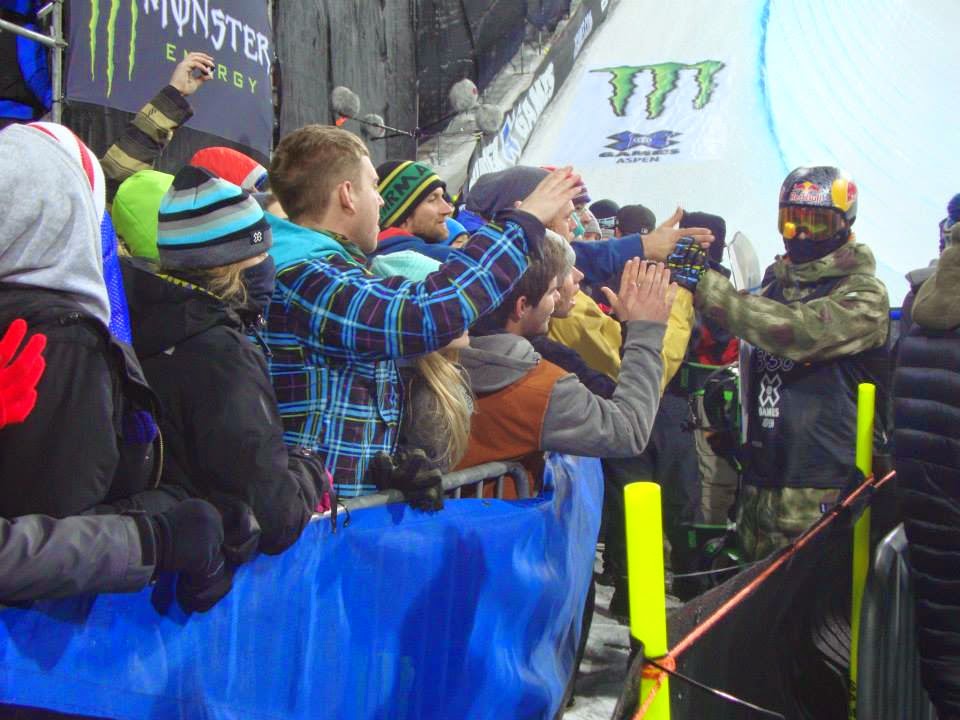 On the drive home this year I was formulating all the articles I'd be writing about X Games this year. And the one I was most excited about was this one: Why Louie Vito May Be The Nicest Guy at X Games.

Louie Vito is a rock star in the snowboarding world. He has earned just under 45 medals in major events, from as far back as 2006. The things he can do in that Super Pipe are no less than amazing. Like many of the professional athletes, Louie looks forward to X Games because of its relaxed mood. He competes just as hard, but he also spends a lot of energy hanging out with the crowds.

I first noticed it in 2013. Most of the athletes are willing to high five, or bump knuckles with the fans who line the fences, but Louie took it a step further. Anyone who asked (or hollered at him) was given the picture, signature, or even hug that they wanted. Watching the guy, you'd never know he was in the middle of a world class competition, just waiting for his next run.

Last year I had my son Sam with me. In the midst of Louie's schmoozing, I asked for a picture. Of course he obliged. We came home with this gem. And again this year, Louie was in full hospitality mode. He chatted with fans, he took selfies, and he signed his name over and over. When an older gentleman handed him a cell phone, and asked him to talk to his wife, Louie didn't bat an eye. He chatted with her for a few minutes, and ended up asking her why she hadn't come to Aspen.  All in good fun. 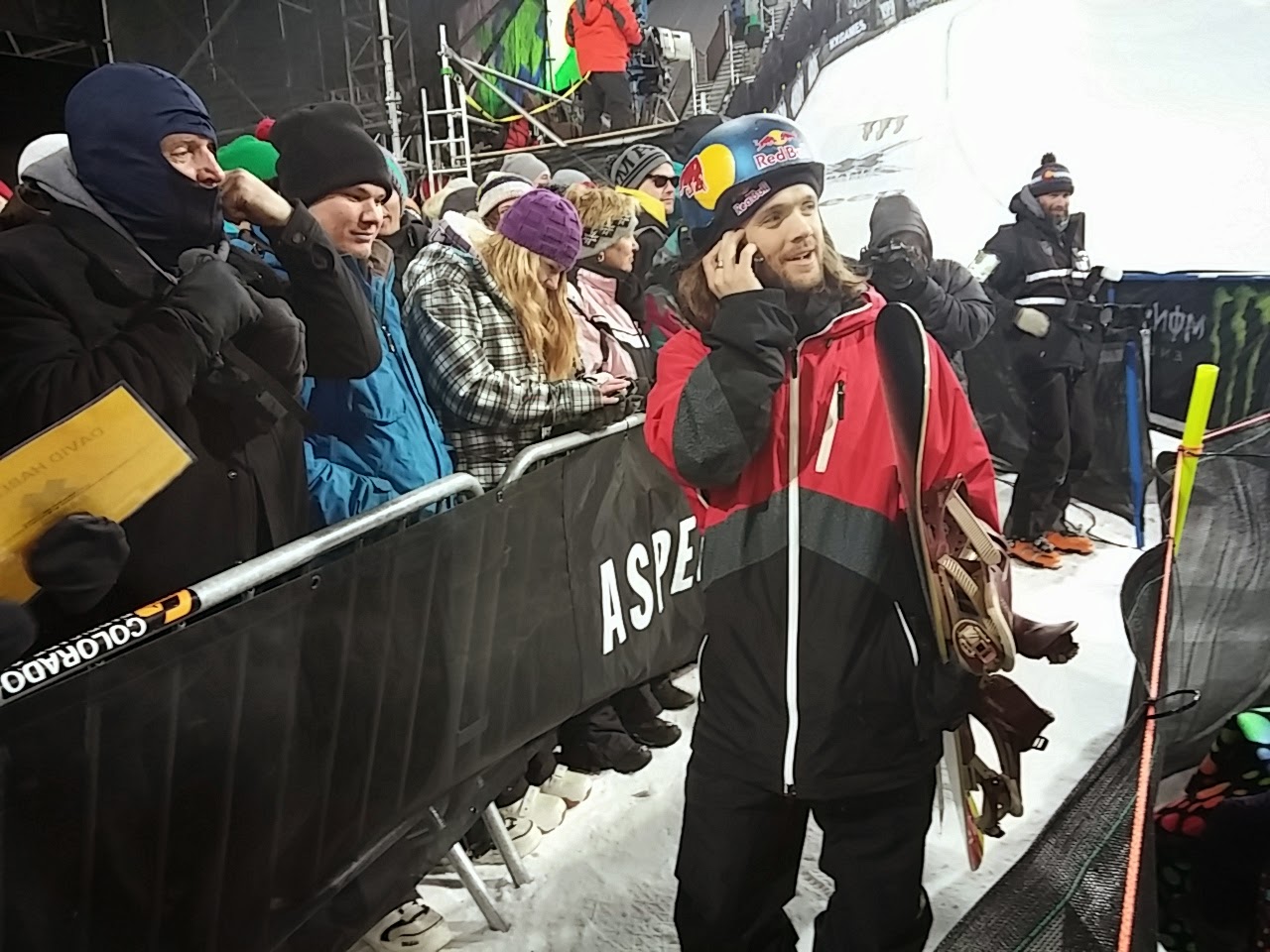 This year I got a series of pictures, of Louie doing what he does best. I had a chance to talk to him for a few minutes and told him I was going to write this article. He wasn't looking for the press. His answer was, "This is why we're here. If you don't love this part, there's no reason to be here." This is a guy who appreciates his fans and recognizes how they play into his career. 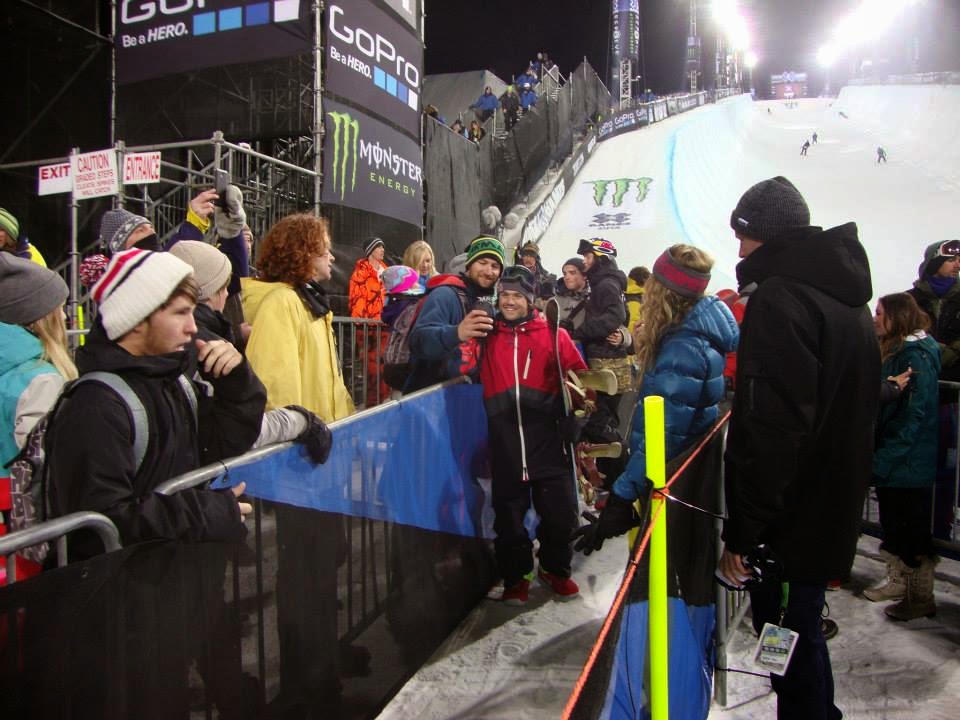 And finally I snapped a picture with Louie and me, and then Louie and my daughter. He flashed that genuine, huge Louie smile, then turned around and got back to 'his crowd.' 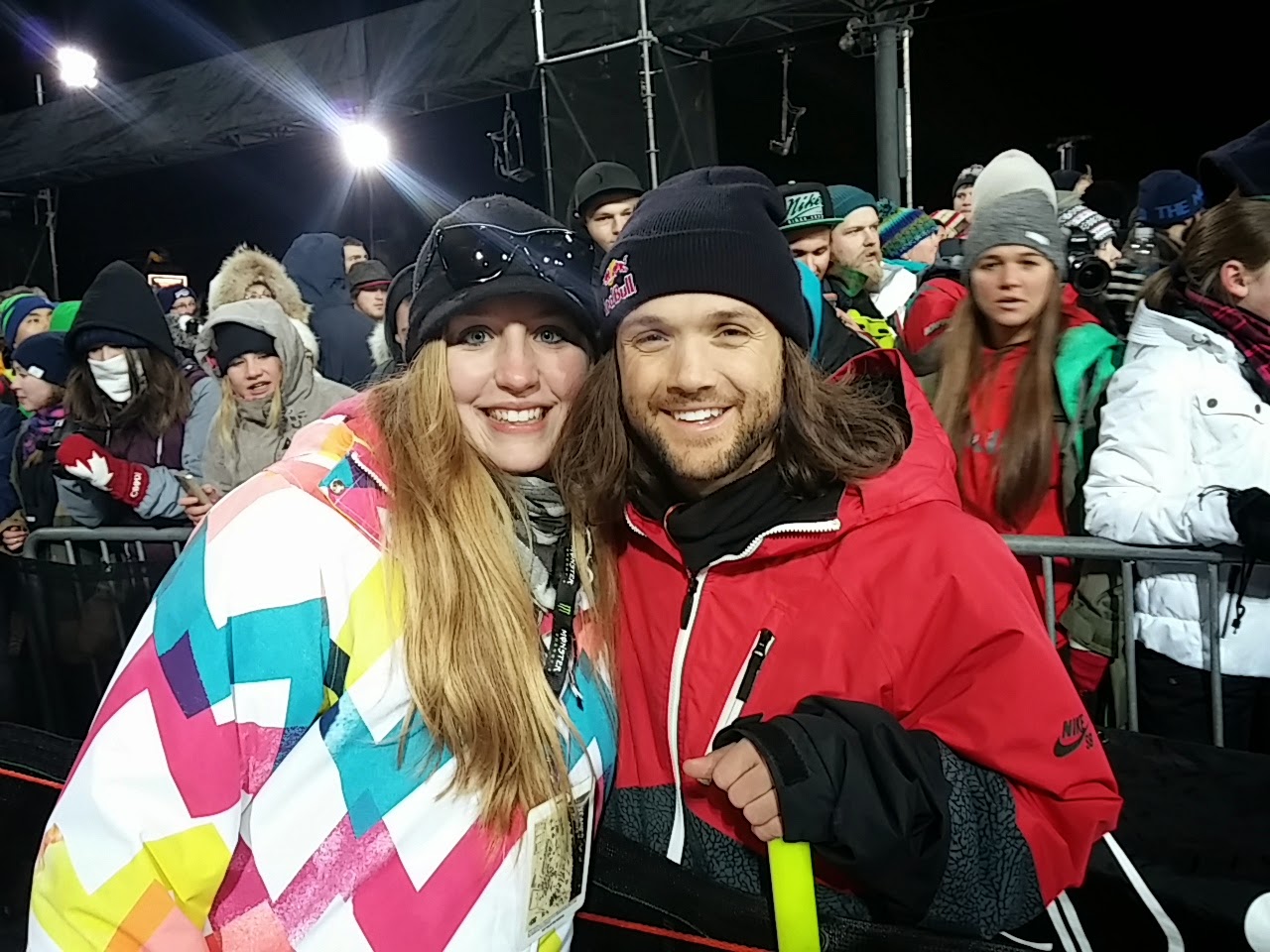 If I had the authority to hand out medals at the end of X Games, the first one I'd present would be a shiny gold one. It would be just one of many in Louie's collection, but I think it would be one of his most important ones. Engraved on it would be the words "Louie Vito - Nicest Guy At X Games".

See ya next year Louie. And hopefully many, many years after that.

Side Note: I'm keeping my eye on a young man named Scottie James, a boarder from Australia. He's talented, he's young, and he's good with the crowds. Watch out Louie, you might have a stiff competition for the Nicest Guy medal next year. 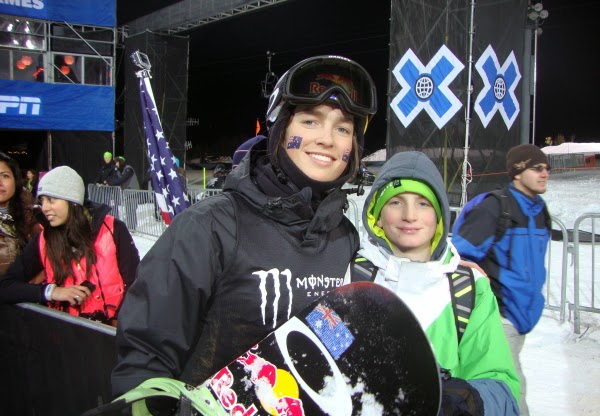 Here are a few more gems, of Louie, doing his thing, working the crowd, and even taking a picture of one of the other athletes with fans, graciously playing photographer. And in the end, signing my artificial leg for me. Nothing surprises this guy. 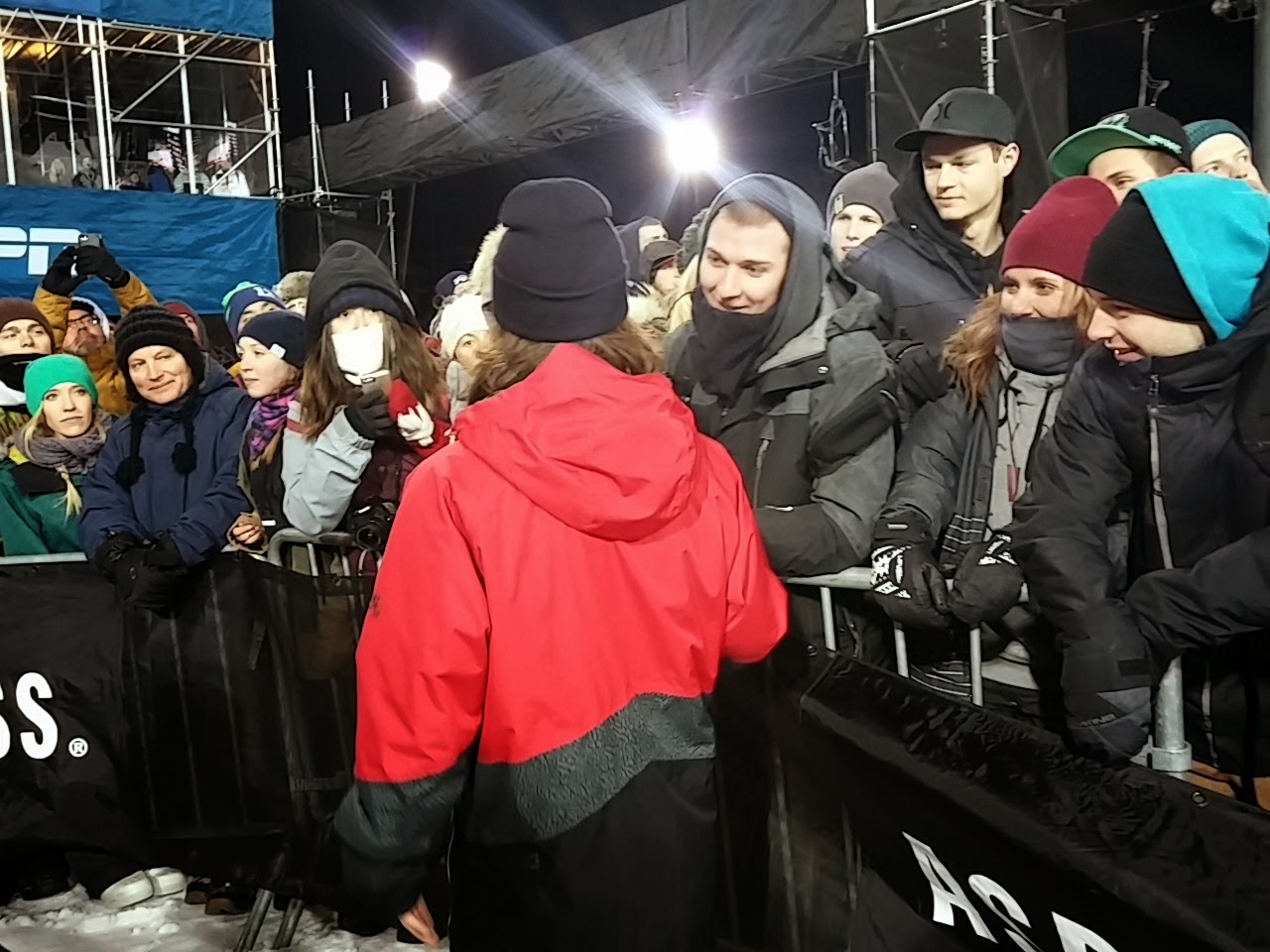 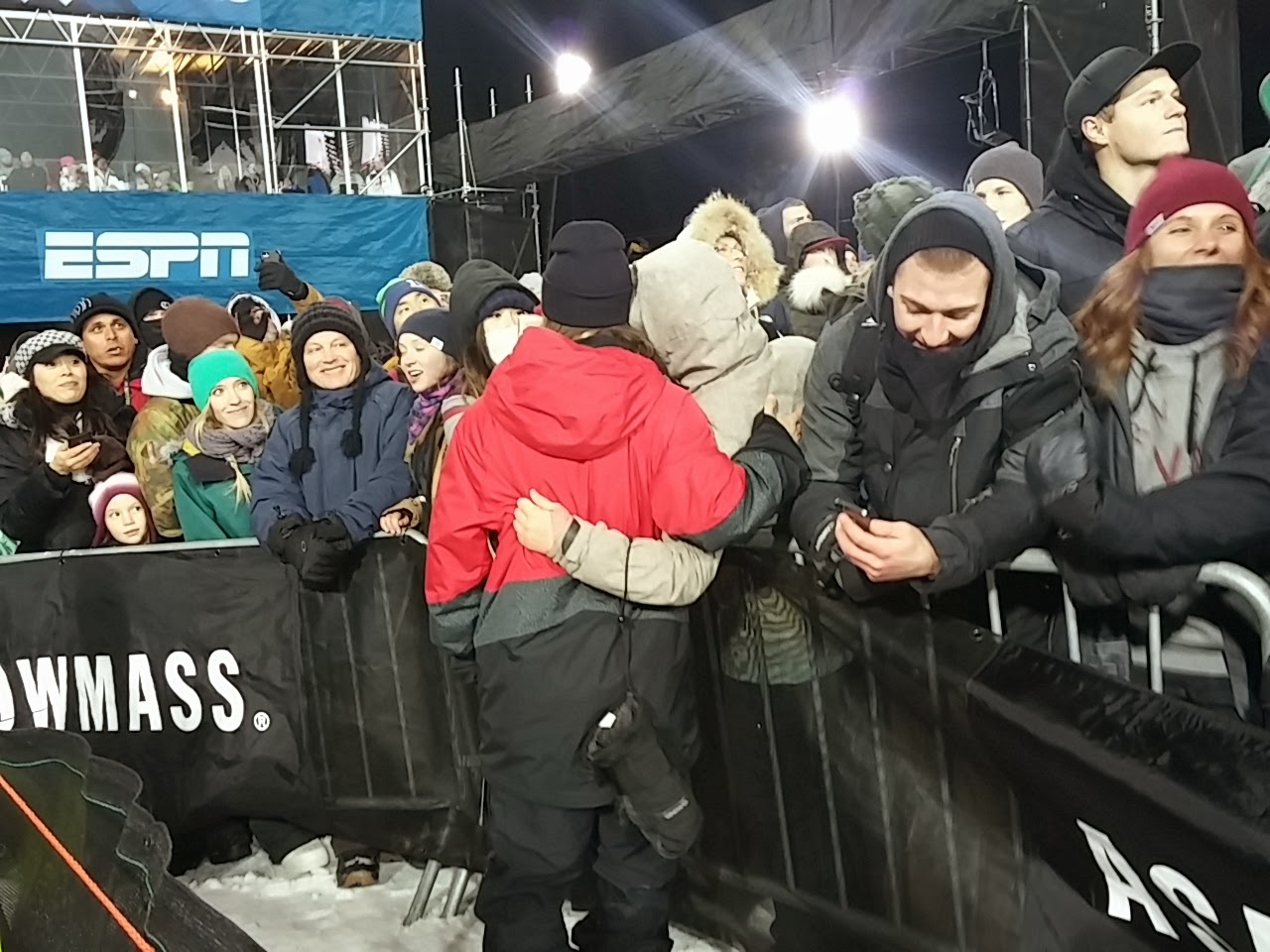 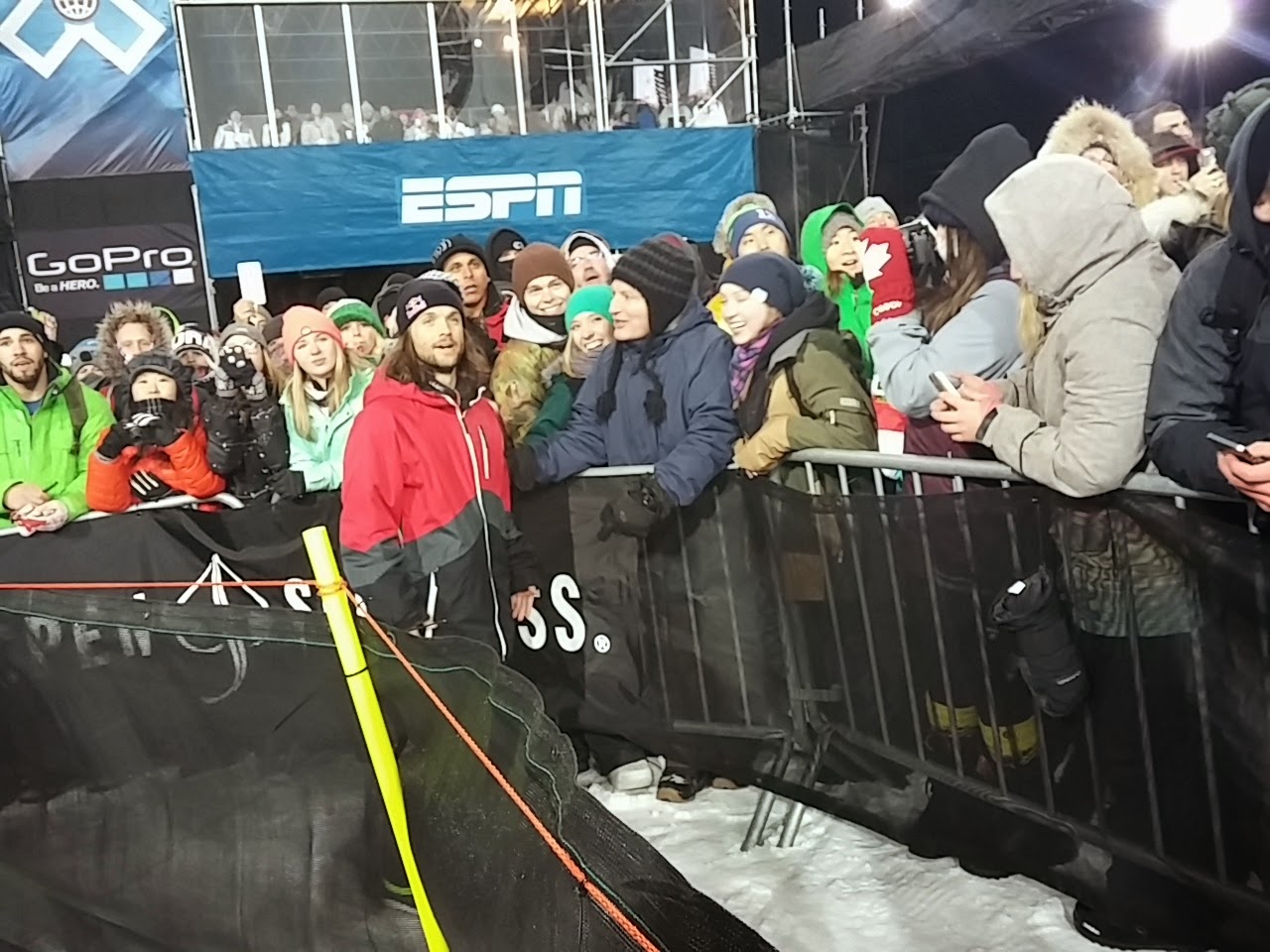 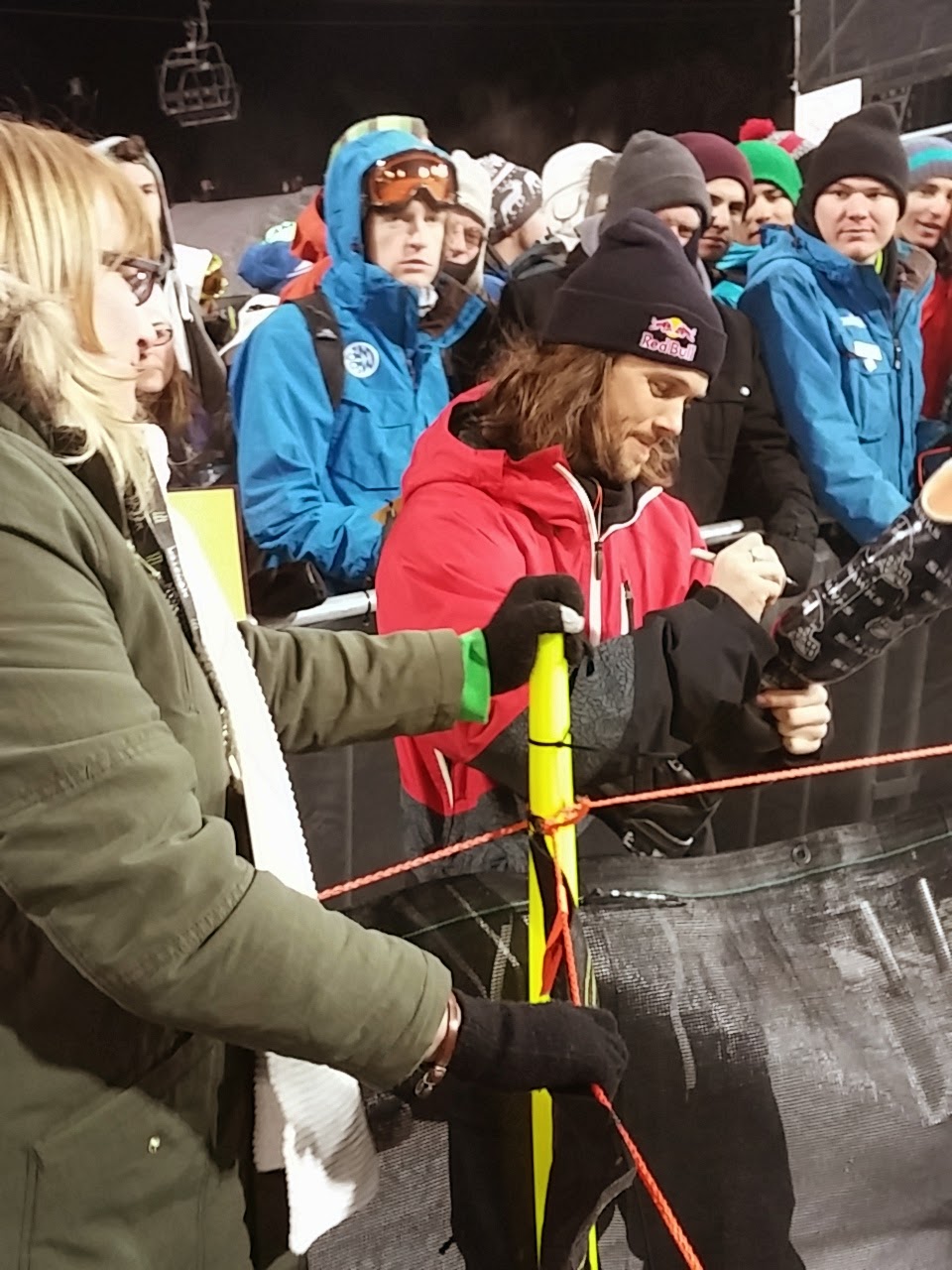 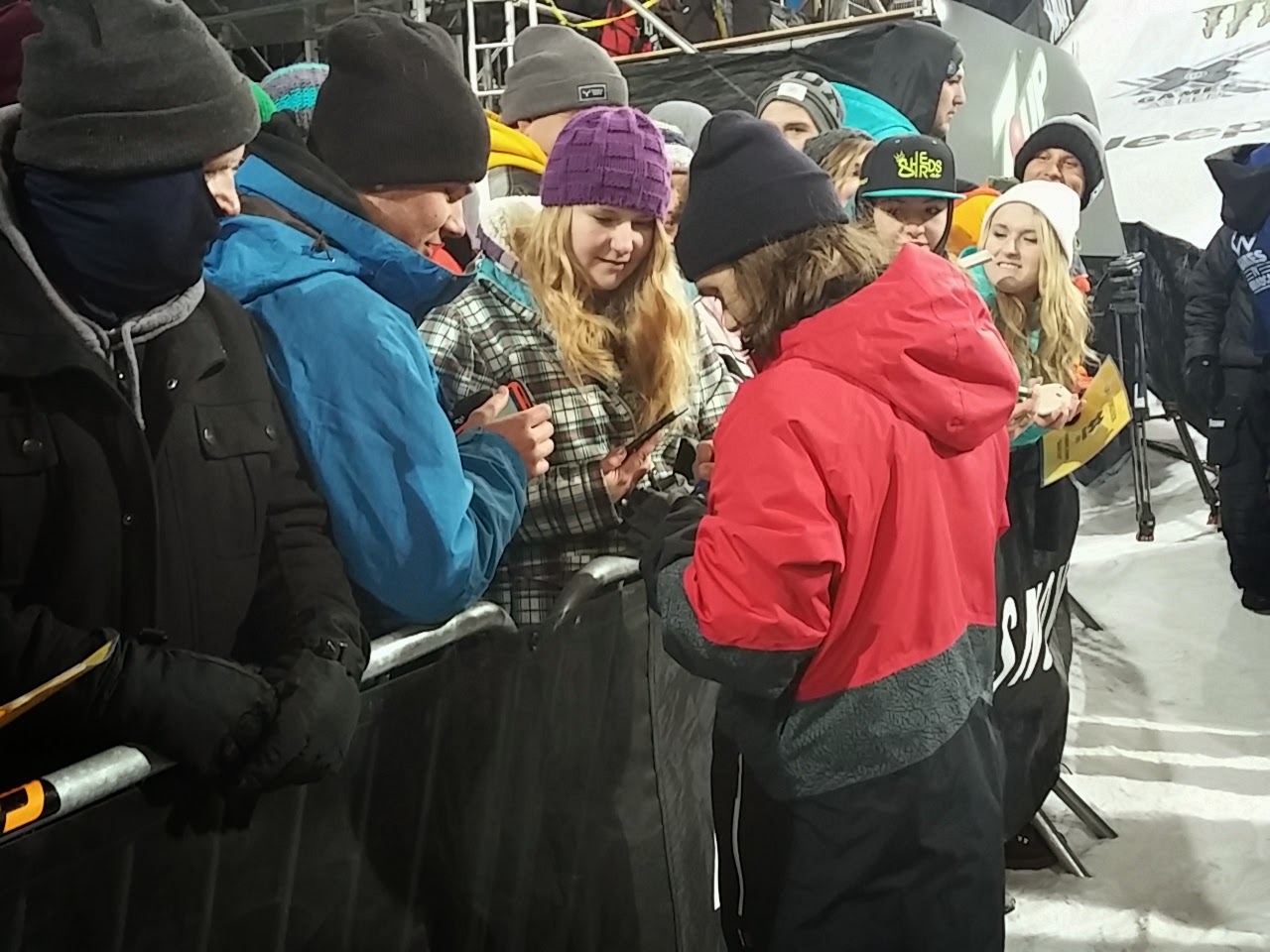 When me and a buddy of mine met him at Mad River Mountain in Louie's hometown. He was as rude as can be. Wouldnt barely speak and wouldnt even look at you. Unless he needed someone to hold his things that is. Crazy how people act when there isnt 50 cameras around.

I'm sorry you had that experience, anonymous. But before I'd judge too harshly, I'd like to point out that he was at his own hometown mountain, maybe trying to enjoy the day with friends or family. He gets approached a lot in public, I'm sure, and he's human. We all cant be in a good mood all the time, esp when it's our 'down time'.
GeekMom Judy

I find it extremely difficult to believe that Louie Vito was ever rude to you. I have seen him at nearly all of his rail jams (where he gives not only his time, but a substantial amount of money to charity). He has ALWAYS gone the extra mile to pose for pictures and sign autographs well beyond the time that had been set aside for this. And it isn't like there are "50 cameras around" or a ton of media. He does it because he IS the nicest guy! Can you name another Olympic snowboarder who does this? Not likely.
I find it quite interesting that someone who, supposedly saw Louie being rude, has to hide behind "anonymous". Sounds like jealousy to me. When someone tells the truth, they usually don"t have to hide their name.....It sure sounds suspicious. When you give back to the community as much as Louie does, let us know. Maybe then, we'll feel that you have something to say worth listening to. Elaine Mara (not afraid to state my name)

I too know Louie to be very gracious with his time with the public. His family taught him right from wrong and he has always been there for his fans no mater what. Maybe anonymous was out of line. A fan. Deb feasel

My daughter has hung out with Louie a few times at Mad River Mountain. Said he was just a great guy. You know, some days you just don't want to be bothered. And some people just aren't smart enough to figure that out.

I've met Louie a few times and he has always been great! I saw him at X-Games a few years back and he always took the time to say hi to his fans - in the middle of his competition! I've also seen him at the Rail Jam a few times (we always make it a priority to go) and he has been AMAZING every time! He always has a huge smile on his face, in the Mad River Den and outside of the building too where there are NOT any cameras. I know he's HUGE on giving back to his community and always plans his busy schedule AROUND the Rail Jam! He's such a great person and I am a Louie Vito fan FOR LIFE! He's my FAVORITE snowboarder ever! Love him!! -Amanda Gaskins - LV Fan!

I echo everyone's sentiments about Louie. My fiance tries to embarrass me cause he knows I'm a big fan and louie goes along every single time and messes with me lol and this is behind the scenes where there is 0 cameras around. (we work with the events) He really is a super nice guy. Louie impresses me year after year with just how approachable and nice he is. He's always dancing with the crowd at the bottom and taking pictures - - it's beyond humble. Stale Sandbech is another awesome one(he's a focused competitor so you may not see it in competition as much he's not mean at all just focused)but He seeks out the kids he doesn't even wait for them to come to him. I watched him take an 8 year old up for a run at Vail after the kid sat there and talked to him for a few minutes about snowboarding. Stale finally looked at the kid and dad and said hey let's just go do a run. That kids eyes lit up like I've never seen. I couldn't believe how incredible he was. Also, watched Stale in the hotel chat with a 10 year old boy and ended up pushing him around the hotel on a luggage cart for what had to be an hour while all the other riders were getting their apres on he was pushing a 10 year old around having the time of their lives. The crop of pro riders right now really are a great group of guys. Big ups to all of them. And yes Scotty James is one of the nicest guys out there as well-- you are definitely right!